US government infectious disease labs mishandled dangerous pathogens five times in the last decade, according to a health agency report.

In response, the Centers for Disease Control and Prevention (CDC) has closed the two labs involved.

There have been no reported infections from previous cases, and no-one potentially exposed to anthrax has shown signs of illness, CDC officials said.

“I’m disappointed, and frankly I’m angry about it,” he said, adding later he was “astonished that this could have happened here”.

The incidents were listed in a report on a potential anthrax exposure in June, which occurred when researchers in a high-level biosecurity laboratory failed to follow proper procedures and did not deactivate the bacteria. 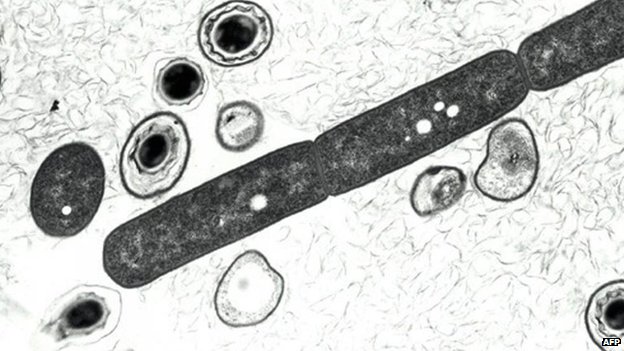 The anthrax bacterium, shown in a 2001 US defence department photo, can cause death if untreated

The samples were then moved to a lower-security lab in the agency’s Atlanta campus.

The CDC only recently learned of a separate incident in May in which a sample of the avian flu was cross-contaminated with a highly pathogenic version of the virus and then shipped to an agriculture department laboratory.

The influenza lab and the bioterror response laboratory have been temporarily closed in response.

The other incidents reported by the CDC:

More on This Story

From other news sites

* May require registration or subscription