The families of slain British soldiers might sue former UK PM Tony Blair if evidence suggests the equipment provided to the troops during the Iraq War was inadequate, Roger Bacon, father of an army serviceman killed in a roadside bomb blast, told RT. 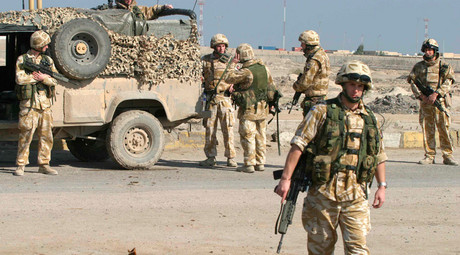 Bereaved relatives of UK servicemen and women slain during the Iraq War are contemplating taking legal action against Blair and/or other officials if the much-anticipated report commissioned in 2009 and prepared by Sir John Chilcot reveals that the government failed to adequately provide for the needs of British military personnel participating in the 8-year-long invasion and occupation.

Bacon, who is member of the Iraq Families Action Group, which is seeking justice from the UK authorities on behalf of the 179 British servicemen killed in Iraq, told RT that he firmly believes Blair “committed an illegal act in taking us [the UK] there.” What is worse, Bacon believes the invasion focused on “regime change,” but lacked planning, leading to grave consequences that put the “entire country in chaos” and allowed groups such as Islamic State (IS, ISIS/ISIL) to take over parts of Iraq.

He added that, after looking at specific cases of UK families that had lost children in the war, it was “quite clear” that the troops had been ill-equipped for their task.

“There is an equipment issue,” Bacon said, while promising to carefully look at Chilcot’s inquiry before he and members of other affected families decide whether to file a lawsuit against Blair or other parties, including the UK’s defense ministry.

“Whether it has to do with suing Tony Blair himself or the ministry of defense over equipment we will have to wait until the report comes out to see what it says about it,” said Bacon, whose son Matthew was killed by an IED in 2005, just five weeks after being deployed, while on his way back from the allies’ headquarters in Basra.

“You don’t expect to lose your son before you go,” the grieving father added.

Over the past years, the families of British servicemen killed over the course of the war have slammed Chilcot for delaying the report’s publication, while threatening to take legal action if a deadline for its release was not set.

“Now we expect a Chilcot report to come out on July 6. It’s just taken far too long to do,” stressed Bacon, who has become one of the most vocal critics of the increasingly protracted publication process.

“It is morally reprehensible to keep delaying the publication of the report,” he said back in 2015.

The report, which is supposed to examine the justification for deploying British troops, may further tarnish the former PM’s less than perfect reputation, as it is expected to be loaded with heavy criticism of his actions prior to the invasion.

“Two million words in it, and within those words there’s going to be, we believe, a lot of criticism about what happened in Iraq and before. How we got into a situation where we went to war,” Bacon added.

The report is rumored to reveal details about secretive meetings between Blair and George W. Bush, in which the then-British PM reportedly said he would support the war in Iraq no matter what. This evidence might confirm allegations that Blair had committed to back the US-led campaign regardless of whether Iraq’s late leader, Saddam Hussein, was in possession of weapons of mass destruction.

In addition, the report will shed light on Blair’s involvement in forging a so-called “dodgy dossier” – an intelligence report claiming that Hussein had the ability to attack Britain with weapons of mass destruction within 45 minutes, which turned out to be false, as no WMDs were found in Iraq at all.

Speaking to BBC on Sunday, Blair said he was prepared to debate the results of the investigation, stressing that he is looking forward to participating in the ensuing discussion. Asked whether he agreed with the report’s conclusions, Blair evaded the answer, claiming that he was not familiar with its contents.

“Well it’s hard to say that when I haven’t seen it,” he said.

However, the former prime minister and other officials who are expected to be accused of mishandling the decision of whether to enter Iraq were allowed to study the parts of the over 2.6-million-word report that exclusively refer to them. This process, called Maxwellisation, is believed to be the main reason the report has taken so long to publish.

“The thing that will be important when it [publication] does happen is that we have then a full debate. And I look forward to participating in that. Make no mistake about that. It is really important we do debate these issues,” he said in an interview with BBC News.