In order to stimulate their respective economies, spur borrowing efforts and try to shoot out the last bullets possible, central banks all over the world are nearing to subzero interest rates.

At the present time, Japan, the European Central Bank, Switzerland and Sweden are sitting at negative territory. But more countries could be entering that list soon, including Albania, Bulgaria and Israel.

Here is a list of countries that are at or near negative interest rates: 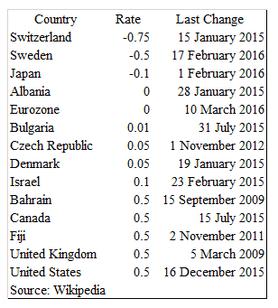 As per Yahoo! Finance:

With inflation, the war on cash and subzero rates, be afraid. Be very afraid.