What are the health effects of mobile phones and wireless radiation? While Australia has led the world in safety standards, including compulsory seat-belt legislation, plain packaging on cigarettes, and product and food disclosure legislation, it falls behind in addressing the significant issues associated with mobile phone use.

In this Dean’s Lecture, epidemiologist and electromagnetic radiation expert, Dr Devra Davis, will outline the evolution of the mobile phone and smartphone, and provide a background to the current 19 year old radiation safety standards (SAR), policy developments and international legislation. New global studies on the health consequences of mobile/wireless radiation will be presented, including children’s exposure and risks.

Dr Devra Davis is an internationally recognised expert on electromagnetic radiation from mobile phones and other wireless transmitting devices.

She is currently the Visiting Professor of Medicine at the Hebrew University Hadassah Medical School, and Visiting Professor of Medicine at Ondokuz Mayis University, Turkey. Dr Davis was Founding Director of the Center for Environmental Oncology at The University of Pittsburgh Cancer Institute -­ the first institute of its kind in the world, to examine the environmental factors that contribute to the majority of cases of cancer.

In 2007, Dr Devra Davis founded non­profit Environmental Health Trust to provide basic research and education about environmental health hazards. Dr Davis served as the President Clinton appointee to the Chemical Safety and Hazard Investigation Board in the U.S.A. from 1994 -1999, an independent executive branch agency that investigates, prevents and mitigates chemical accidents. 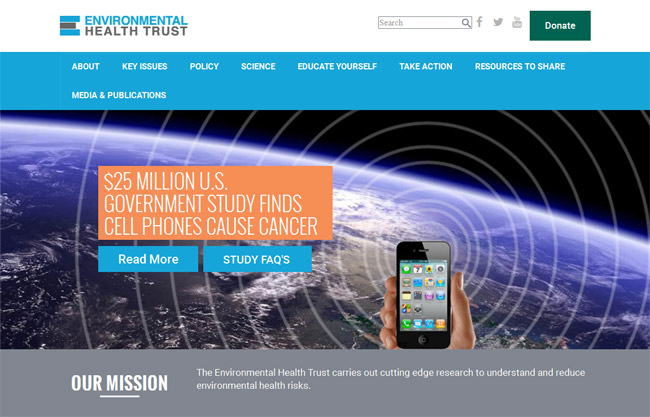 As the former Senior Advisor to the Assistant Secretary for Health in the Department of Health and Human Services, she has counseled leading officials in the United States, United Nations, European Environment Agency, Pan American Health Organization, World Health Organization, and World Bank.Dr Davis holds a B.S. in physiological psychology and an M.A. in sociology from the University of Pittsburgh, 1967. She completed a PhD in science studies at the University of Chicago as a

Danforth Foundation Graduate Fellow, 1972 and a M.P.H. in epidemiology at the Johns Hopkins University as a Senior National Cancer Institute Post-­Doctoral Fellow, 1982. She has authored more than 200 publications and has been published in Lancet and Journal of the American Medical Association as well as the Scientific American and the New York Times.