Struggle against corruption inside the international federation of football associations FIFA is a crucial task, but it would be impermissible to politicize that process and violate international law as the investigation proceeds, polled experts have told TASS.

“Sports and politics must be kept separately,” Russian President Vladimir Putin said about the FIFA corruption scandal on Thursday.

Just two days before the elections of a FIFA president, due on May 29 the Swiss police arrested several senior officials of the association on charges of corruption. The arrests followed an investigation that had been held simultaneously in two countries – Switzerland and the United States.

The Swiss Prosecutor’s Office has opened a criminal case against “unidentified persons” on the suspicion of corruption and money laundering in the process of selecting the host countries of the 2018 and 2022 world football cups – Russia and Qatar respectively. In a statement issued on Wednesday the US Department of Justice said that the FIFA leadership over the past 24 years indulged in illegal enrichment through various corruption schemes in international football. In all, sports officials have allegedly received more than $150 million in bribes and kickbacks. 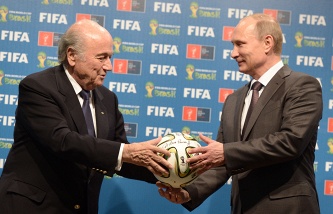 The Russian Foreign Ministry has criticized the arrest of FIFA officials at the request of the United States as “another case of illegal ex-territorial application of US law.”

A lawyer of the Moscow association of lawyers Klishin and Partners, Vladimir Entin, has pointed to a number of legal violations in the latest actions by the US Justice Ministry. “Fighting with corruption in international sports organizations is necessary, but it is very alarming that the United States is spreading the operations of its law enforcement agencies beyond the bounds of the national territory without coordination with or prior warning to the countries whose citizens are arrested on warrants issued by US courts,” Entin told TASS.

“Under its Constitution the United States does not extradite its own citizens to foreign jurisdictions, but at the same time it is demanding the extradition of FIFA officials to the US. You will agree that this is a dubious legal affair.”

By linking the corruption investigation with the circumstances in which decisions were made in favor of hold the 2018 World Cup in Russia and the 2022 World Cup in Qatar the US and Swiss authorities cast a shadow on the reputation the host countries, thereby causing moral damage to them in violation of the principle of the presumption of innocence,” Entin believes.

The director of the Institute of Political Studies, Sergey Markov, has drawn attention to the United States’ attempts to politicize the investigation of corruption in FIFA.

“It is not accidental that on May 22, less than a week before the corruption scandal and the arrests of FIFA officials two US senators – John McCain and Robert Menendez – dispatched yet another message to FIFA claiming that Blatter was a bad president and should be replaced by a different leader who would agree to meet their insistent request for stripping Russia of the right to host the 2018 World Cup. Just two days before the elections of FIFA’s new president a group of senior officials were put under arrest. Such concerted action by US senators and the Department of Justice is amazing,” Markov, a member of the Civic Chamber, told TASS.

“FIFA is a huge trans-national corporation with a mammoth budget and hundreds of millions of football fans behind. FIFA president Joseph Blatter has been trying to be independent from the world hegemon. For this reason the hegemon has decided to use an ordinary corruption scandal in an attempt to seize control of the organization by exerting pressures on the election of a FIFA president. Having gained control of FIFA, the world hegemon will lay hands on new, unique levers to influence the policies of many countries through their football – a game of millions,” Markov said. “I believe that by means of arrests of FIFA officials the United States wishes to put pressure on the organization’s 79-year-old president to force him to resign and to replace him with pro-US Prince Ali Bin Al Hussein, of Jordan. Then the United States would be able to gain control of one of the most influential organizations in the world. Incidentally, Britain’s Prime Minister David Cameron, the United States’ main ally, hurried to throw his weight behind Prince Al Hussein’s candidature as soon as the scandal erupted,” the director of the Globalization Problems Institute, Mikhail Delyagin, has told TASS.

Delyagin, a member of the international discussion club Valdai, recalls that any deal concluded on the basis of corruption is declared void. As it pushes ahead with its hybrid war against Russia, the United States will do its utmost to force the FIFA officials who are accused of corruption, once they are in a Brooklyn jail, to testify the decision to select Russia for hosting the 2018 World Football Cup had a corruption side to it,” Delyagin said.

He believes that in a situation like that for Russia it would be reasonable to address the United States with an offer of conducting a joint investigation of FIFA officials.

“If the United States rejects the proposal, it will in fact recognize in writing the affair is politicized and targeted against Moscow as one of the key elements of anti-Russian sanctions. In this way the United States will turn millions of football fans around the world into its enemies,” Delyagin said.