In the latest atrocity in Yemen, Saudi warplanes bombed a residential area, killing at least 65 people. Most of the victims are reported to be civilians from the Salah district of Taiz, Yemen’s third largest city.

The apparent war crime committed has tragically become an almost daily occurrence during five months of relentless aerial bombardment of Yemen by a Western-backed coalition of foreign powers.

In recent days, there were similar air strikes on civilian centers in the Red Sea port city of Hodeida and the northern province of Saada. In the Hodeida strike, which killed several dock workers, the British charity Save the Children said it believed the attack was a deliberate bid by the Saudis to sabotage aid supplies to the civilian population.

READ MORE: Religious eugenics: How Saudi Arabia is sponsoring a frightening new movement in the ME

Surely, this should be front page news, with CNN, the BBC and France 24, among other big Western media outlets, splashing it as their top story. The onus is on them because their governments are implicated in grave crimes. However, there has been no news coverage of the tragic events. Aside from some brief, vague reports of a generalized humanitarian crisis, there has been a wall of silence as to how the Western-backed Saudi-led coalition is pulverizing Yemeni civilians and creating the crisis. That suggests a deliberate blackout by Western media.

To date, the death toll in the country has reached near 4,500, according to the World Health Organization. This week, the United Nations put the total number of children who have been killed at 400. Yemeni sources say the civilian casualties are much higher, but can’t verify because of the widespread mayhem.

Meanwhile, the International Committee of the Red Cross (ICRC) and the World Food Program say the country is on the brink of cataclysmic famine, with over 50 percent of the 24 million population at immediate risk.

Yemen was already the Arab region’s poorest country even before the US-backed and Saudi-led military coalition began bombing on March 26. In just five months, the country is crumbling into a “Syria-level crisis,” according to the ICRC.

What’s happening in Yemen cannot be described as anything less than “foreign aggression” on a sovereign country, where civilians are being slaughtered by American-supplied “precision bombs” and F-16 fighter jets. The systematic starvation of people by denying them food, water and medical aid as a result of an air and sea blockade on the country adds to the barbarity. This is genocide by any legal definition of the word.

Despite the horror and complicity of Western governments in that horror, the Western news media avoid providing informative reports on the carnage in Yemen. When the media do give occasional brief reports, they routinely distort the nature of the violence as if it is being perpetrated by two warring sides: on the one hand, “Saudi coalition forces”; and on the other, “Iranian-backed Houthi rebels”.

Let’s quickly dispense with that self-serving distortion. The Houthi rebels are not Iranian-backed. How could they be when Yemen is blockaded by Saudi and American forces? The Houthis are in alliance with the Yemeni national army and other rebel groups, called Popular Committees. Earlier this year, the revolutionary front kicked out the US and Saudi-backed puppet-president Abded Rabbo Mansour Hadi, taking over much of the country’s territory, including the capital Sana’a.

That is why the Saudis and their Persian Gulf Arab dictator cronies, plus the Egyptian dictatorship of Abdel Fattah el-Sisi, joined forces to bomb Yemen. They claim to be defending the “legitimate government of Yemen” represented by Hadi and his corrupt clique who are exiled in the Saudi capital Riyadh. No doubt the region’s dictatorships fear the spread of revolutionary contagion, as do the Western patrons of these despotic regimes.

Washington, along with Britain and France, is supporting the Saudi-led bombing coalition, not just politically and diplomatically, but with the supply of warplanes, missiles and logistics. The US has set up a fusion center in Saudi Arabia for the purpose of coordinating the Arab-piloted F-16s.

Germany is also implicated as, according to Der Spiegel, it is the fourth biggest arms supplier to Saudi Arabia, after France, Britain and Italy.

On the ground in Yemen, there are remnant supporters of the deposed Hadi regime. Clashes between these loyalists and the revolutionary forces have indeed contributed to the civilian death toll. But, again, Western media attempts at portraying the conflict as some kind of civil war are grossly misleading. 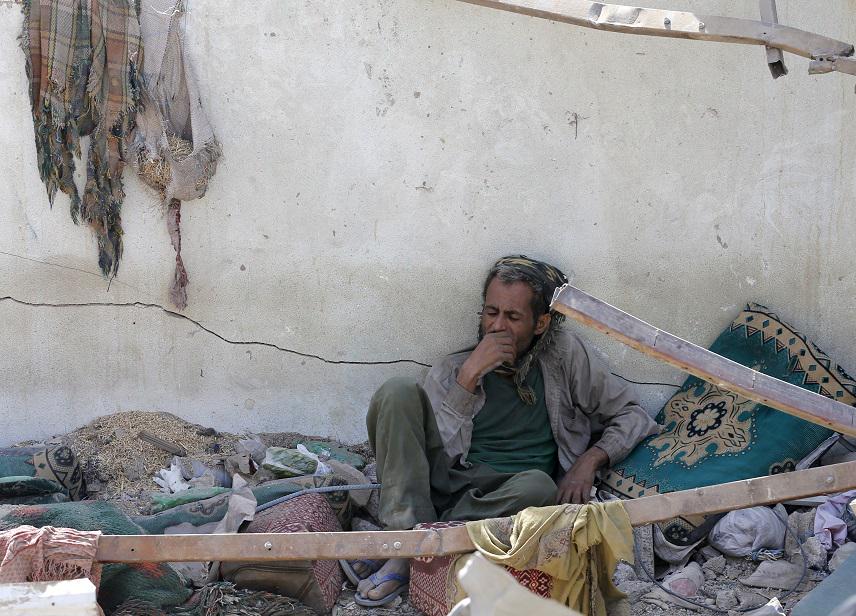 Among the pro-Hadi forces are troops from Saudi Arabia and the United Arab Emirates. Several Saudi and Emirati soldiers have been confirmed killed in recent battles in the southern areas around the port city of Aden, as well as in fire fights across Yemen’s northern border with Saudi Arabia. The Saudi-led coalition has expanded its involvement in the ground war over the past month with the arrival of artillery and armored vehicles and up to 3,000 Saudi and UAE troops, according to the Financial Times.

Also among the pro-Hadi forces are Jihadist mercenaries from across the region that have been trafficked into Yemen by the Saudis, according to Yemeni civilian and military sources. This is the same strategy that the Saudis and the Persian Gulf Arab regimes have been using in Syria over the past four years to overthrow the Assad government, along with covert support from Turkey, Jordan, Israel and Western governments.

Western media have, of course, given copious coverage of the Syrian war, with false narratives about “moderate rebels” fighting against a “despotic regime”. Syria gets covered because Washington, London and Paris want to implement regime change there for strategic reasons to do with undermining Assad’s allies in Russia and Iran. Whereas in Yemen “regime reinstallation” of a corrupt exiled clique doesn’t quite have the same story appeal. Therefore, the Western media just ignore Yemen.

The jihadists fighting in Yemen are linked to the Sunni extremists of Al-Qaeda and the Islamic State network, specializing in suicide bomb attacks on mosques frequented by the Shia Houthis.

Washington and its Western allies are thus heavily involved in an illegal war of aggression against Yemen, prosecuted by Saudi Arabia and other Arab dictatorships working in collusion with Islamist terror networks. Adding “efficacy” to this state-sponsored terrorism is the humanitarian siege imposed on the population.

What is happening in Yemen is truly a heinous crime against humanity committed by Western governments. It is an unspeakable crime. And that is why the Western media will not dare talk about it. The Western media are obliged to ignore, obfuscate and distort the shocking truth of what their governments are committing in Yemen.

This makes the Western media just as complicit in the appalling criminality.

The statements, views and opinions expressed in this column are solely those of the author and do not necessarily represent those of RT.