The original Cassius (Marcellus) Clay (1810-1903) was an American politician and abolitionist active during the administration of Abraham Lincoln. Clay pushed Lincoln to free slaves under Confederate control and was a key player behind Lincoln’s emancipation proclamation. Muhammad the “Holy Prophet” of Islam and his cousin and son-in-law Ali were slave owners and slave traders. The irony cannot be overstated.

Muhammad Ali the boxer died 3 June 2016 at age 74 after a long battle with Parkinson’s disease attributed to head injuries he sustained during his boxing career. He was considered the greatest in the history of the sport and his extroverted and alpha male personality attracted a lot of attention.

His conversion to Islam and subsequent name change from Cassius Clay to Muhammad Ali raises a curious question as to why he would change his name from his original namesake – an abolitionist to that of a slave owner and trader? One can only assume ignorance and in particular of the fact that slaves whom ended up in the Americas were sold to Europeans by Muslim Arab slave traders.

Dr Bill Warner, the director of the Center for the Study of Political Islam concurs that there is certainly a profound and endemic ignorance about the history and doctrine of political Islam in the West.

Warner notes that Arab Muslim slave trade put many white Europeans and black sub-Saharan Africans into slavery; that white women were the highest valued slaves in Mecca; that under Islamic caliphate non-Muslims were designated dhimmi who are second class citizens forced to pay the jizya poll tax; that the Christian Crusades were in response to 400 years of Islamic expansion and conquest under the various caliphates; that Islam put over 1 million Europeans into slavery; and that political Islam (distinct from spiritual Islam) has subjugated civilizations for 1400 years. 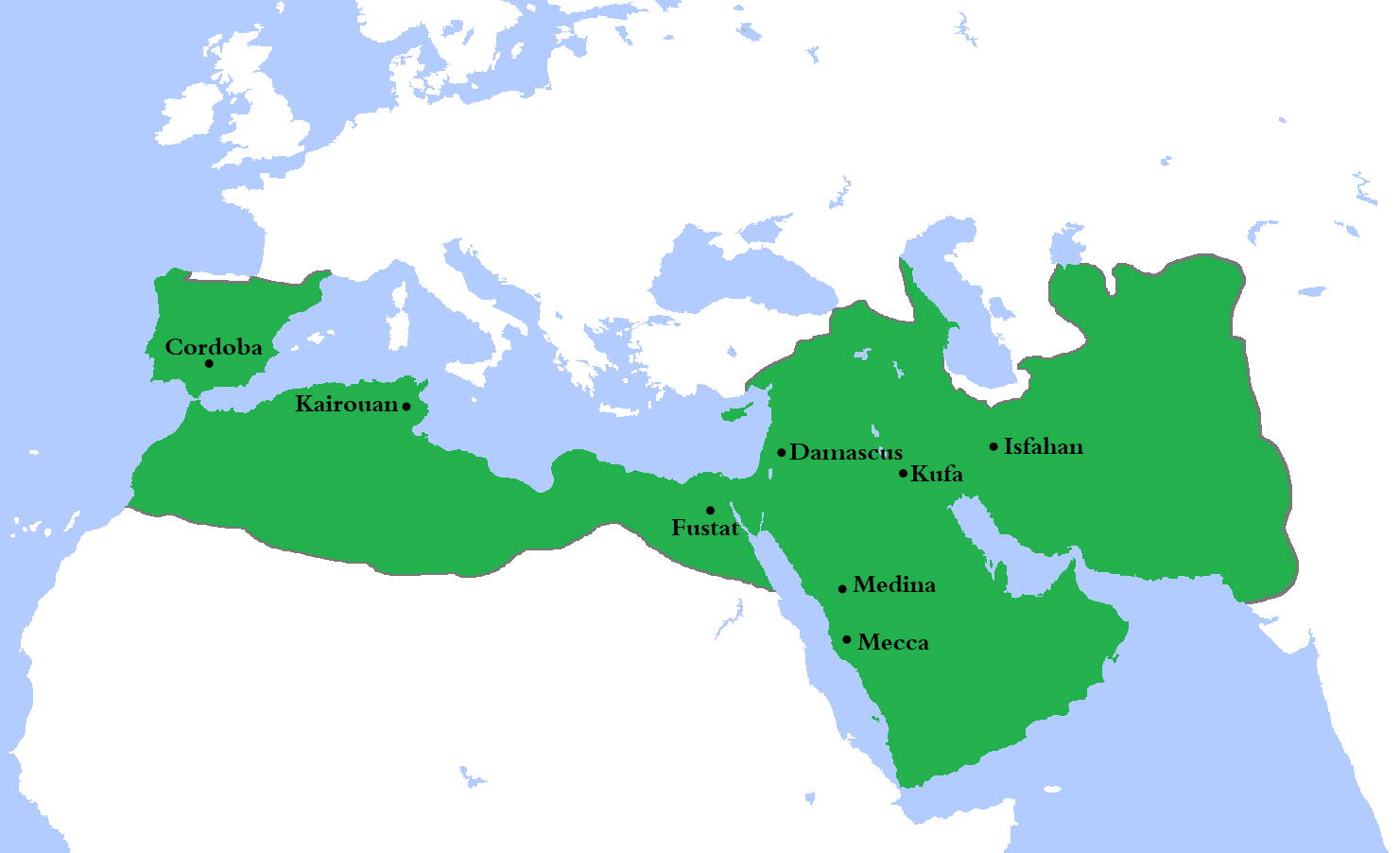 The Umayyad Caliphate (661-750AD) was the fifth largest empire (out of 214) in all of world history and three times the size of the Roman Empire at it’s peak. Only the British, Mongol, Russian and Spanish empires were bigger.

This invites the obvious question – is Islam a religion of peace or conquest? Warner suggests that to answer this, one must understand the inherent dualism in Islam. For example, the Koran is in fact two books; there is the Koran of Mecca (earlier) and the Koran of Medina (later). The principle of abrogation stipulates that the latter supersedes the former. However, according to Islamic doctrine both are good because Allah and therefore the Koran are perfect, but the latter verse is better.

The contradictions that this principle of abrogation imposes is resolved by specific circumstances. Circumstances govern which verses in the Koran are used. Western Judeo-Christian; Greco-Roman logic is governed by the principle of contradiction whereby if two propositions contradict then one must be false. Islamic logic contends that both contradictory propositions can be true. This is perhaps why the central question as to whether Islam is a religion of peace or conquest can never be resolved given that there is no right or wrong answer.

Warner notes that dualistic systems can only be measured by statistics as is the case with disciplines such as quantum mechanics.

For an example of using statistics, look at the question: what is the real jihad, the jihad of inner, spiritual struggle, or the jihad of war? Let’s turn to Bukhari (the Hadith) for the answer, as he repeatedly speaks of jihad. In Bukhari 97% of the jihad references are about war and 3% are about the inner struggle. So the statistical answer is that jihad is 97% war and 3% inner struggle. Is jihad war? Yes—97%. Is jihad inner struggle? Yes—3%. So if you are writing an article, you can make a case for either. But in truth, almost every argument about Islam can be answered by all of the above. Both sides of the duality are right.

Warner also notes that the universal or unitary ethic that governs a functional civilization is the concept of The Golden Rule that maintains that we must treat others how we would want to be treated. This is the underlying principle of the common bond of “humanity”. He suggests that this is absent from political Islamic doctrine and he argues

Look at the ethical statements found in the Hadith. A Muslim should not lie, cheat, kill or steal from other Muslims. But a Muslim may lie, deceive or kill an unbeliever if it advances Islam.

Here the duality of the “believer” and “unbeliever” governs the course of action and the common bond of humanity only comes into effect once the entire world has converted to Islam. However, Warner also acknowledges that

Now mind you, unbelievers have frequently failed at applying the Golden Rule, but we can be judged and condemned on its basis. We do fall short, but it is our ideal.

Ultimately dualistic ethics and unitary ethics are irreconcilable. The contradiction inherent in dualistic ethics precludes compromise. Under Islam’s dualist ethic the unbeliever holds the dissenting view in all cases and is therefore bad and the lesser being. Conversely, the believer can hold both the dissenting and consensus view and is therefore good and the greater being. However, the view that both believer and unbeliever can compromise is precluded by the explicit designation of “believer” versus “unbeliever”.

To that effect, according to Warner

Islamic politics, ethics and logic cannot be part of our civilization. Islam does not assimilate, it dominates … There is never any “getting along” with Islam. Its demands never cease and the demands must be met on Islam’s terms:  submission.

To be sure Warner makes a clear distinction between political and spiritual-religious Islam of which the latter does share a common ethic with other world religions and systems. However, the question still remains – is Islam predominatly a doctrine of peace or conquest and domination? Warner proceeds with statistical methodology:

These are the Five Pillars—prayer, charity to Muslims, pilgrimage to Mecca, fasting and declaring Mohammed to be the final prophet.

Political Islam’s most famous duality is the division of the world into believers, dar al Islam, and unbelievers, dar al harb. The largest part of the Trilogy relates to treatment of the unbelievers, kafirs. Even Hell is political. There are 146 references to Hell in the Koran.Only 6% of those in Hell are there for moral failings—murder, theft, etc.

The other 94% of the reasons for being in Hell are for the intellectual sin of disagreeing with Mohammed, a political crime. Hence, Islamic Hell is a political prison for those who speak against Islam.

Mohammed preached his religion for 13 years and garnered only 150 followers. But when he turned to politics and war, in 10 years time he became the first ruler of Arabia by averaging an event of violence every 7 weeks for 9 years.

His success did not come as a religious leader, but as a political leader.

In short, political Islam defines how the unbelievers are to be dealt with and treated.

The Arab as the slave trader of the black African is often downplayed in discussions about slavery. Slavery is often synonymous with antebellum America and the cotton fields of the southern United States owned by wealthy white colonists. However, the richest man in the history of the world (i.e. of all time) was Mansa Musa the Emperor of medieval Mali who was a slave trader.

Mansa Musa on a map of North Africa circa 1375. Musa’s wealth in relative terms was more than that of the Rothschild dynasty, John D. Rockefeller, Andrew Carnegie and Tsar Nicholas II of Russia.

Polite conversation attributes Musa’s wealth to his entrepreneurial talents in marketing Mali’s salt and gold resources which accounted for around half the world production. However, it neglects to acknowledge that the vast majority of the cultivation and mining labour came from the slave pool dominated by medieval Arab slave traders of which Musa was invariably one.

Under political Islam one has two choices; either join a glorious religion or suffer religious and political persecution. Christians and Jews of the Middle East and North Africa; Zoroastrians of Persia; the Buhhists and Hindu of southern Asia; as well as pagan or indigenous-primal sub-Saharan Africans have all been presented with such a choice and ultimately suffered as victims of jihad.

Today this issue is rather more complicated when one considers the demonstrable evidence that the Western (global power) elite, more accurately characterized as “globalists” (liberal-internationalists and corporate transnationalists), have manipulated and exploited political Islamic fervour to further their globalist agendas. The British aligned themselves with Hashemite mercenaries engaged in the Arab Revolt during WWI to speed up the fall of the Ottoman Empire, as depicted in Lawrence of Arabia; the Nazis aligned themselves with the Muslim Brotherhood during WWII; the US gave covert support, through the CIA, to the Mujahideen during the Soviet-Afghan war; then NATO deployed the same Arab-Afghan foreign legion (the future al Qaeda and ISIS) in Bosnia and Kosovo; then again in Libya and Syria.

This tendency towards forging Faustian pacts with extremists did not extend exclusively to Islamic fundamentalists. Indeed at the conclusion of World War II Germany negotiated a “separate peace” with the US. The purpose of this arrangement was to recruit select Nazis into ‘Operation Gladio’. Ostensibly, this operation was conducted to combat the (new) Soviet threat of Communist invaders. However, in practice it involved the staging of terrorist attacks by right-wing operatives to be blamed on Communist and leftists.

It was a psy-op on the European populace designed to elicit manufactured consent for greater government powers under the pretext of security. It is perhaps the prototype for the modern false-flag operation often characterized as a Hegelian dialectic expressed as “problem-reaction-solution”. Ultimately the operation set up a “shadow government” within Europe, predominantly Italy (but eventually also, Austria, France, Germany, Belgium and other Western European countries), that commanded “secret armies”.

Theses armies were referred to as “stay-behind units”; a motley crew of radical right-wingers, neo-Nazis and fascists that were mobilized against so-called Communists and the putative Soviet threat. It was NATO’s clandestine paramilitary operation against the Warsaw Pact that officially ran from 1956 until 1990.

The legacy of Operation Gladio lives on in Al Qaeda, Al-Nusra and ISIS who are the new Islamic versions of NATO supported neo-Nazi fascist gangs that terrorized Western Europe during the so-called Cold War.

As we mourn the passing and celebrate the life of Muhammad Ali, formerly Cassius Clay, we ought to take the opportunity to review our understanding of politics, religion and history. Ultimately, Muhammad Ali converted to a religion that enslaved millions of Africans. Who would have thought?

One thought on “Muhammad Ali versus Cassius Clay”